5 Things to Know About Drones in Africa 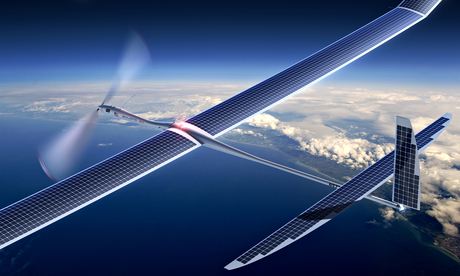 (Photo from Titan Aerospace, a drone startup acquired by Google.)

These multi-national companies are increasingly interested in ‘connecting the world’ with Internet, with both acquiring companies like Titan Aerospace and Ascenta that create high-altitude drones. Since internet access is mostly covered in the developed world, the future growth will come primarily from the remaining 5 billion people on earth who are still without great internet connection. While these companies may have noble reasons for wanting to connect the world, the more people online there are, the higher their revenues will be.

The poaching of elephants and rhinoceroses at night has been a known problem in Africa for years and the threat of extinction of some of these targeted animals is high. And with the development of drone technology with thermal cameras, conservationists believe they have found the answer to this problem. Over a year ago, Google gave the World Wildlife Fund a $5 million award to look for new ways to deter wildlife crime and the WWF has spent a majority of the grant on implementing bungee-launched drones in some of Namibia’s national parks.

Governments from Ghana to Uganda to Ethiopia are using drones for a variety of reasons, from monitoring potential terrorists to patrolling pirate-dominated waters. This has drastically reduced their costs that would have other gone to equipping and maintaining an air force.

4) To solve problems of poor infrastructure

The roads and highways in Africa are not up to par by how quickly the economy is growing. While drone technology will not solve problems with land rights, food security or water rights, there is high potential for it to affect other areas. In e-commerce, Savannah Fund portfolio company Ahonya recently announced their acquisition of drones to deliver products in Ghana. Modeling after “Amazon Prime Air”, Ahonya aims to shorten their delivery time by using drones to overcome issues of vehicular traffic (this was actually a PR stunt 🙂 but the potential is actually real one day).

“Africa is fast becoming an adopter of cutting-edge technologies to overcome its infrastructure gap. Commercial drone technology has strong potential here to help overcome the limitations of the continent’s transportation infrastructure and deliver goods and services in remote or regions — spurring new models for business and service delivery.” -Kamal Bhattacharya, IBM Research

Flying Donkey is an organization that has created a challenge to roboticists, engineers, logisticians, designers and regulators worldwide to build large drones capable of lifting heavy suitcase loads over long distances. Before 2020, they plan to host a race of the created drones around Mount Kenya for under 24 hours. They plan to release their first commercial ‘Flying Donkey’ in Africa by 2020. It will carry at least 20 kilos for over 50 kilometers in less than an hour.

“Since Africa is growing too fast to build out its road network, transportation will have to be supplemented from the sky. It is hoped that tens of thousands of low cost flying donkeys will be operating on established networks in Africa and globally within a generation, lifting Africa by creating jobs and enabling e-commerce and community to community exchanges in a shared economy.”

Savannah Fund has previously run a technology focused accelerator program in Nairobi. By investing $25k, holding small intimate classes and providing hands on help, we have accelerated over 10 startups across Africa since 2012.